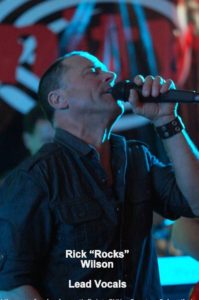 Rick is a UPS truck driver with the voice of Steve Perry. His singing endeavors never ventured beyond the confines of his shower until he amazed the crowd with his victory at a karaoke contest. His live radio spots speak for themselves. “Rick singing Journey” has thousands of hits on YouTube. The fact that he has no formal vocal training proves the raw talent that shines from Rick with every performance. Before Infinity, Rick performed with Bad Alice and Free Reign.
Rick is the founding member of Infinity from 2012 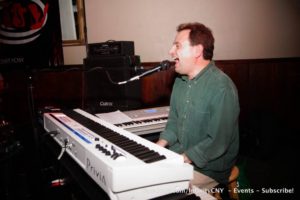 Jamie has played keyboards since “Don’t Stop Believin'” hit the radio in 1981. He brings his multiple abilities as an accomplished pianist, skilled rhythm guitarist, and player of many wind instruments. All of this along with his incredible vocal dynamic fills out the sound of Infinity. Jamie has performed with Phish tribute band “Divided Sky” in the 90’s and rock cover band “Oliver Twist” in the 2000’s, and formerly with dance/party band “Mood Swing”.
Jamie joined Infinity Oct 2015 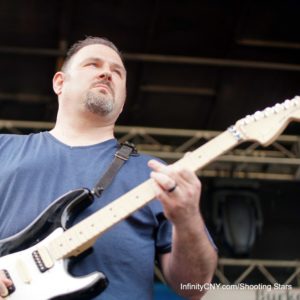 Matt has been playing guitar for 25 years, and has a wide range of musical interests. He has been a member of the CNY hard rock band “F5” for 17 years and has performed in the acoustic duo “Just Some Dudes” with former “Infinity” member Mike York.  Matt also works as a high school special education teacher. When not playing or working, Matt enjoys watching b-movies and building guitars, effects pedals and amplifiers.
Matt joined infinity 2019

Dave is a multi-instrumentalist who puts his 11 years of classical music training to good use with Infinity.  An engineer and graduate of Syracuse University, Dave’s vast musical experience includes everything from marching bands to stage shows. His bass work has spanned more than three decades working with several popular local acts including LA, The Wayback Machine, The United Booty Foundation, Buster Skidd, Mood Swing and Clavin’s Mother.
Dave started with Infinity March 16, 2013

Joe has been playing drums since the early age of four. He was influenced by his Dad, Brother, and Uncle Craig Gruber who was the original bassist for Richie Blackmore’s Rainbow.

Along with drums, Joe also plays guitar, bass, and saxophone.

He has played in many different projects over the years: Tempter, Rictor, Cliff Diver & the 6lb. Bucket, One Hard Krank, Grind, Unbroken, Michael P. Ryan, Whiskey Mae, The Bomb; and he is one of the founding members of Scars N’ Stripes. Two of these endeavors each won a Sammy Award.

Joe is a warehouse/inventory manager for a local countertop fabricator and installation company, where he has worked for the past 17 years.  His passion other than music is golf; if Joe is not working or playing drums you will find him on a golf course.

Get the Friday Fan Updates via Email

Learn how to get your music noticed at ReverbNation.com